Today Bill went with me as I had several errands to run. He patiently waited while I got my hair cut. Later as I shopped for a casual top at Walmart, he followed me around the numerous display racks and shelves. No complaints. In an unfamiliar route he helps me look for street names and checks to see if cars are coming when we’re getting out of a parking space or waiting at a stop sign. I also look, for his right eye doesn’t have good vision.

We ate lunch at Chicago’s Pizza and Bill especially liked the sweet slice on the buffet. This stop was his favorite of all our errands. He likes to eat, paying attention to the clock, telling me it’s past 12 noon and we could have lunch. I think his eating is only to keep from being bored.

At the bank he stayed in the car while I cashed a check. Somehow the subject of marriage came up and the teller asked me how long we’d been married. When I said 62 years next month, she replied that I must have found a good man. I agreed. Then she asked me to tell another teller, a newlywed, what our secret is. I told them, “It’s commitment – to the Lord and to each other.” When I got back to the car I relayed the conversation to Bill, emphasizing the part about his being a good man, a keeper. I wish I had told the girls at the bank that Bill was in the car, that he now has Alzheimer’s disease, and that while we’ve changed, our commitment has not changed. It’s new every day. 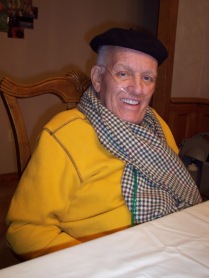 This is Bill in August of 2010 when he got out of the hospital after a bout with Legionnaire’s Disease. He was always cold then. He’s cold now & turns on a space heater under his desk. That’s why I reached for this photo.

I love the Lord. To those I love I am wife, mother, granny, great-granny. To my corner of the world I am a writer. View all posts by aflcoker

One thought on “Opportunity”

This site uses Akismet to reduce spam. Learn how your comment data is processed.