Sitting at my desk at church, I’m gazing out the window. Earlier I had been thinking of Evelyn Underhill’s meditations on the Lord’s Prayer, some perceptive ideas on the significance of Jesus’ petition, ‟Thy kingdom come, Thy will be done in earth, as it is in heaven” (Matthew 6:10, KJV). Underhill’s lesson on the Lord’s Prayer has profoundly challenged me.

However, looking out my window and watching the construction going on, my thoughts have moved from the spiritual to the mundane. I have been absorbed in watching a backhoe digging a rather deep trench across our former patio. Sitting at the controls is a woman—not something I would have expected to see—intently maneuvering the extended shovel and scooping out precisely the amount of dirt necessary to be removed for whatever purpose the trench is being dug. 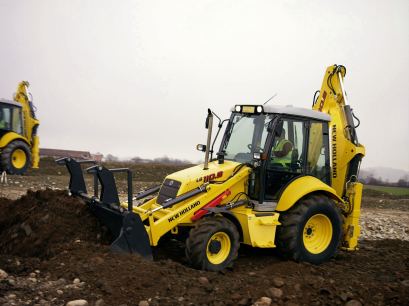 Her face betrays no hint of a nonchalant attitude; she is serious about her job and intent on doing it right. Being a woman in a position where one might ordinarily expect to find a man, and the only woman on the construction site, one might easily assume that she may be a bit self-conscious. Then again, maybe past experience has already earned her place behind the controls of these earth-moving machines.

Needless to say, spiritual parallels are begging to be drawn. I am struck by the power of the backhoe. It’s not a large machine, as earth-moving equipment goes, but as it bites into the dirt and scoops up shovelful after shovelful, it does so with no strain on its engine. It was built for this task. I think: Oh God, you have made your Church for tasks far greater than it often performs; yet so often we strain even at jobs that are much smaller.

I am impressed by the woman at the controls. Surely, she has been told numerous times that this was no place for her; but she refused to be denied. Had she, like many a little boy, dreamed that someday she would operate such a big machine and persisted until she got the job? So I muse: Oh God, how many times have we given in to the suggestion that the job was too big for us, or that this was really a job for someone else? Have we been persistent enough in reaching for our dreams, those urgings that came from you?

The expression on the face of this backhoe worker is intense as she carefully removes the right amount of dirt. I know that hours of practice have honed her skill to manipulate the shovel to do what she wants it to, and I have enjoyed watching as she has guided its reach and its retrieval. This observation has led me to think: O God, how intent have we been in doing a task far more important than digging a trench? You have commanded us to go into all the world and make disciples, and sometimes we are so casual in our response. We have too frequently lacked the intensity of this woman on the backhoe in developing our spiritual skills and in doing the job you have given us. Lord, teach us how to dig.  ~William B. Coker, Sr.

Adapted from the World Gospel Church newsletter (several years ago)

I love the Lord. To those I love I am wife, mother, granny, great-granny. To my corner of the world I am a writer. View all posts by aflcoker

This site uses Akismet to reduce spam. Learn how your comment data is processed.